Aquilops in My Hand 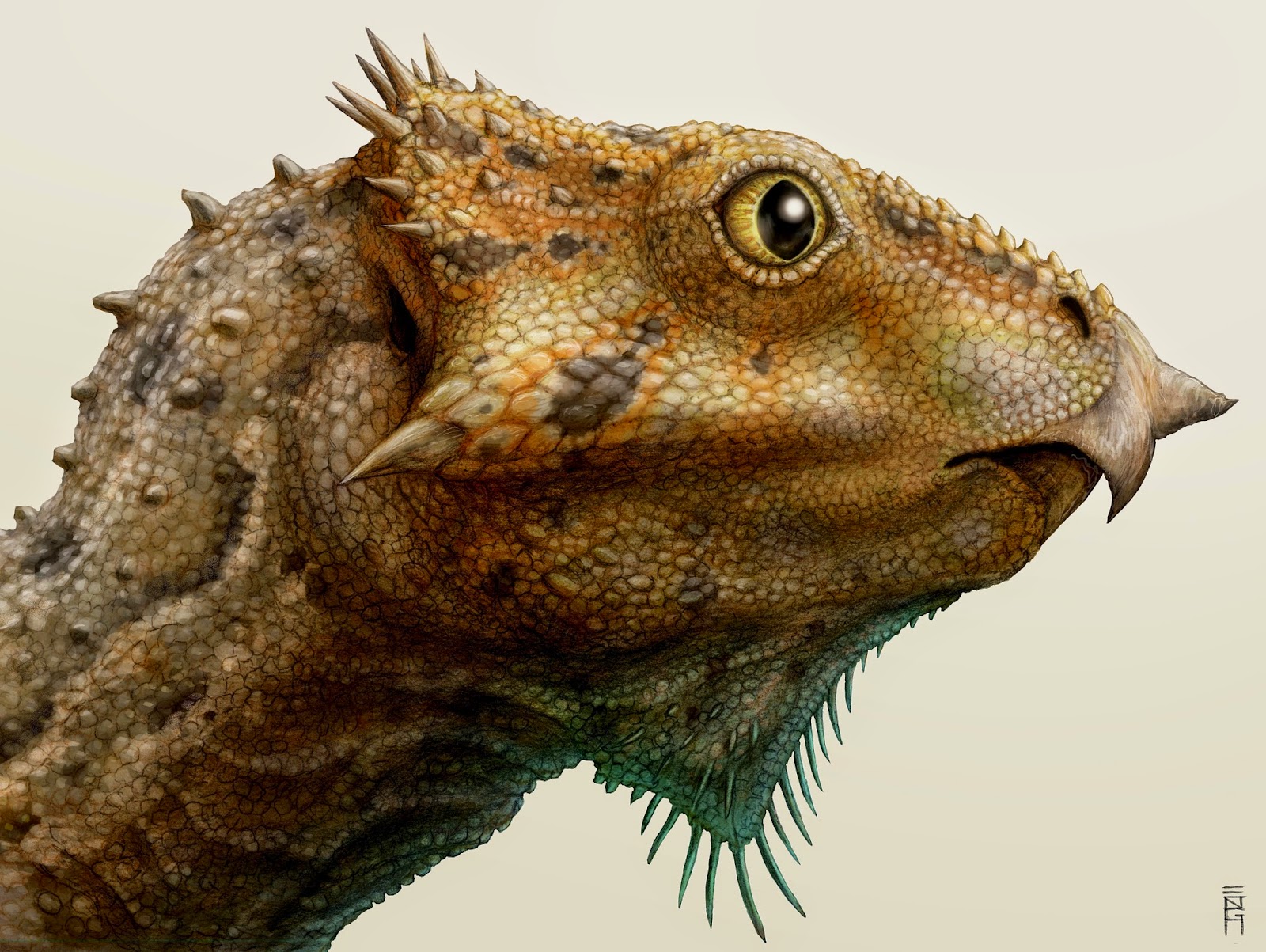 There's a new basal neoceratopsian in town. It's from Montana's Cloverly Formation, and it's a raccoon-sized critter that is the oldest definitive horned dinosaur in North America: Aquilops americanus, an eagle-faced cutie. It was described by Andy Farke, Desmond Maxwell, Richard Cifelli, and Matthew Wedel. Andy wrote about it at The Integrative Paleontologist, and Matt Wedel has been covering it extensively--as well as public outreach--at SV-POW. Check it all out.


Little Aquilops is a great fossil, but what makes it especially valuable, to me, is that the authors included 3D PDFs as supplementary files in the description. You know what that means? If means that if you have access to a 3D printer, you can print your own Aquilops holotype. So I got with the UAA Engineering Department, and they were happy to print off a few copies as a curiosity. They didn't even charge me, which I felt was way too generous. But the prints came out extremely well. Before I show them off, here's the holotype skull so you can compare the two: My print was bone-white, which is fine, and I may paint it to differentiate things like teeth, the rostral, and fenestrae. But anyway, here's how the skull turned out: 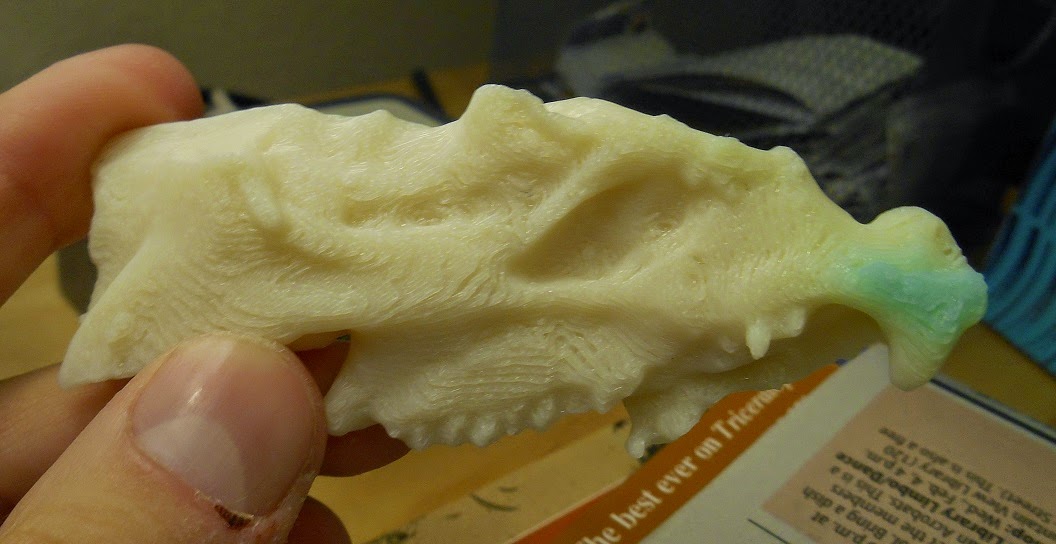 I was blown away when I saw this. I don't know what I was expecting, but it wasn't this. Even the premaxillary teeth are clearly differentiated. I initially thought the printer had screwed up the palpebral bone, but when you look at the holotype, nope, it's perfect. Here it is from the other side: 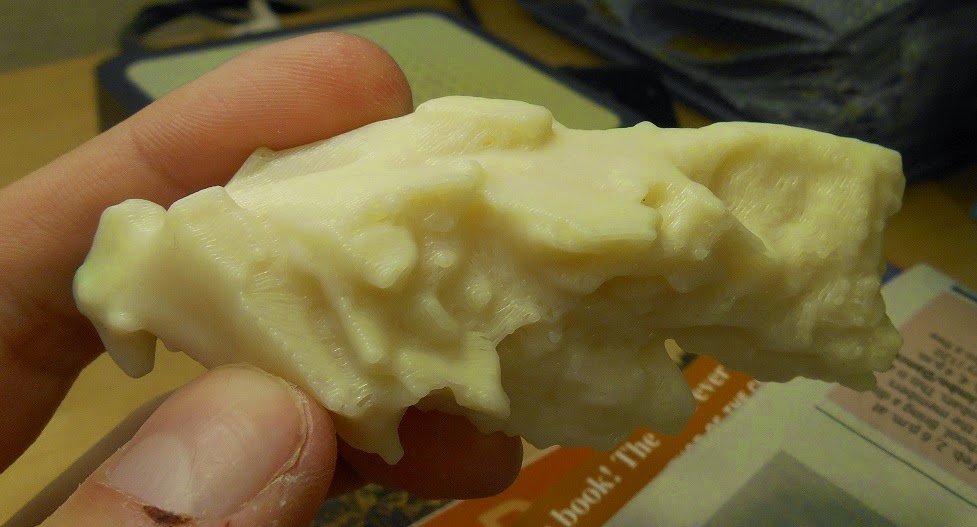 You can see the skull roof (what's left of it) and the badly-preserved left side of the skull. The images in the description don't really underline how distorted the skull is--it's like a cardboard box that's been folded halfway flat. That's one of the cool things about holding this replica in my hands: a lot of the detail that's so abstract when reading a description pop right out. Not content with just the skull, I got the mandible printed as well. It's very tiny, but it also turned out great: 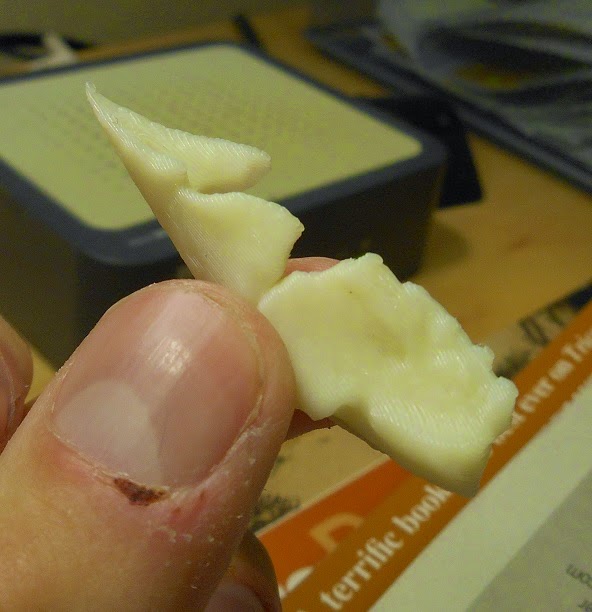 According to the description, the mandible was actually broken in two pieces, and the model impressively captures the point of breakage (about halfway) where it was glued together. The only thing I'm a little disappointed by is the lack of detail on the teeth. But hey, that's a minor complaint. 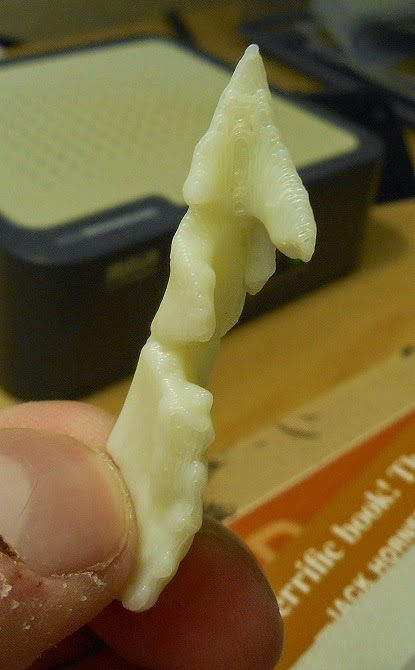 I like this view. It looks like, despite being fragmentary, the mandible is actually less deformed than the skull. You can see and feel the lateral ridge that would rise up to the ascending process. The tooth row is clearly inset. The predentary's left side is incomplete, but appears roughly complete on the right. The predentary's articulation with the dentary bone is subtly visible when you angle it correctly. I might be seeing things, but the articulation appears to line up with the description.

I'm just super impressed by this 3D model, and I give all the credit to the UAA student, Tyler, who helped me fabricate it. I actually had five copies made and I already have recipients in mind. If you want your own Aquilops holotype, I highly recommend finding a 3D printer. If I could find one in Anchorage, Alaska, I'm sure you'll have far less trouble.

I also want to thank the authors for including 3D PDFs at all. It's incredibly gratifying to be able to hold such an exacting replica of the holotype, and to be honest, I got a little emotional while I was looking it over. I don't get out of the state much, and I certainly don't get around to too many natural history museums. I'm extremely thankful for this opportunity. Just think, only a few years ago this would've been impossible!

I'd also like to say that 3D printing provides an incredible educational opportunity. It's one thing to show a room full of students (kids or adults) photographs or interpretive line drawings of fossils. It's such an abstract concept. You can tell somebody that a fossil skull is roughly 4" long, but if you can put the skull in their hands, it suddenly becomes very real. I strongly encourage other authors to include 3D PDFs of their fossils--at least the smaller ones.

I've heard rumblings that all of the bones of Beelzebufo have been scanned for 3D printing...that's a mighty tempting project!
Posted by Zachary Miller at 7:48 PM

The author and his pet Microraptor